I’ve always wondered about the importance of shapes in certain symbols like for example if the second pentacle of mercury has to be enclosed by a circle or could it be something like below: 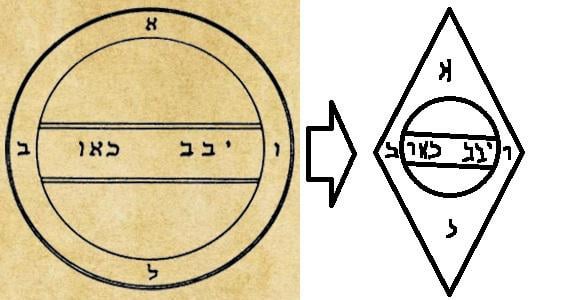 Would it even work? Does shape of rhombus change anything? I know it’s a stupid question but I’m just corious to what extent can you modify those symbols.

Shapes are derived from vectors and postulates, so a different shape is a different formula and vectors and thus different rays of different angles. Intuitively, think about how the shape of a mirror changes the angles of light rays. How you can change light waves with the shape of mirrors, you change magical waves with the shape of symbols. All periodic forms have waves, mind you. In that example, you’ve drawn relationships between things in an inner and outer loop. A shape in a shape is a loop in a loop where you’ve connected every node to every nth node. By changing shapes, you’ve changed how energy relates to the entities. Changing from a circle to a rhombus changed the periods of the waves and created rays at certain angles where the vectors are related.

It’s sort of like saying instead of 12 hours on a clock, there are now 8 hours on a clock and I’m only including even numbers. You’ve changed the timing of the clock. Same concept. You’ve changed the periods of the waves of the angles of the shape. If this is tacitly magical, changing the shape changes waves of magical potential. Changing the relations of the symbols changes the formula. It seems small but using different shapes in magical grimoires drastically changes the spell. Most times, the spell just doesn’t work. Other times, it can cause a short-circuit where the magic tries to ground itself via the principle of least action which can be catastrophic.

Changing the outer shape is shortening the period by making it into a rhombus. In that image, you’re transforming the magical potential via compressing it. In other words, you’re making it denser.

A way to experiment with this is writing algorithms that draw shapes from looping and iterating through a function. This makes the idea of how shapes relate to periods more intuitive. If each node is a sigil, it sorts of teaches you how to make your own seals.

Ceremonial magic and seals are highly algorithmic. Substituting things in magic is just as problematic as when done in cooking. You might end up with a disgusting mess of a meal.